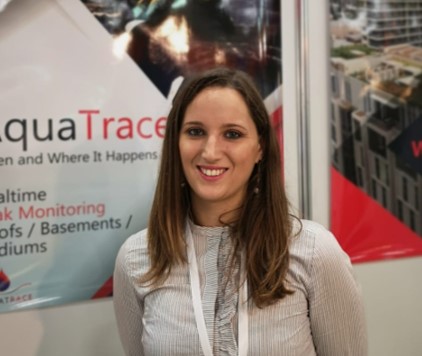 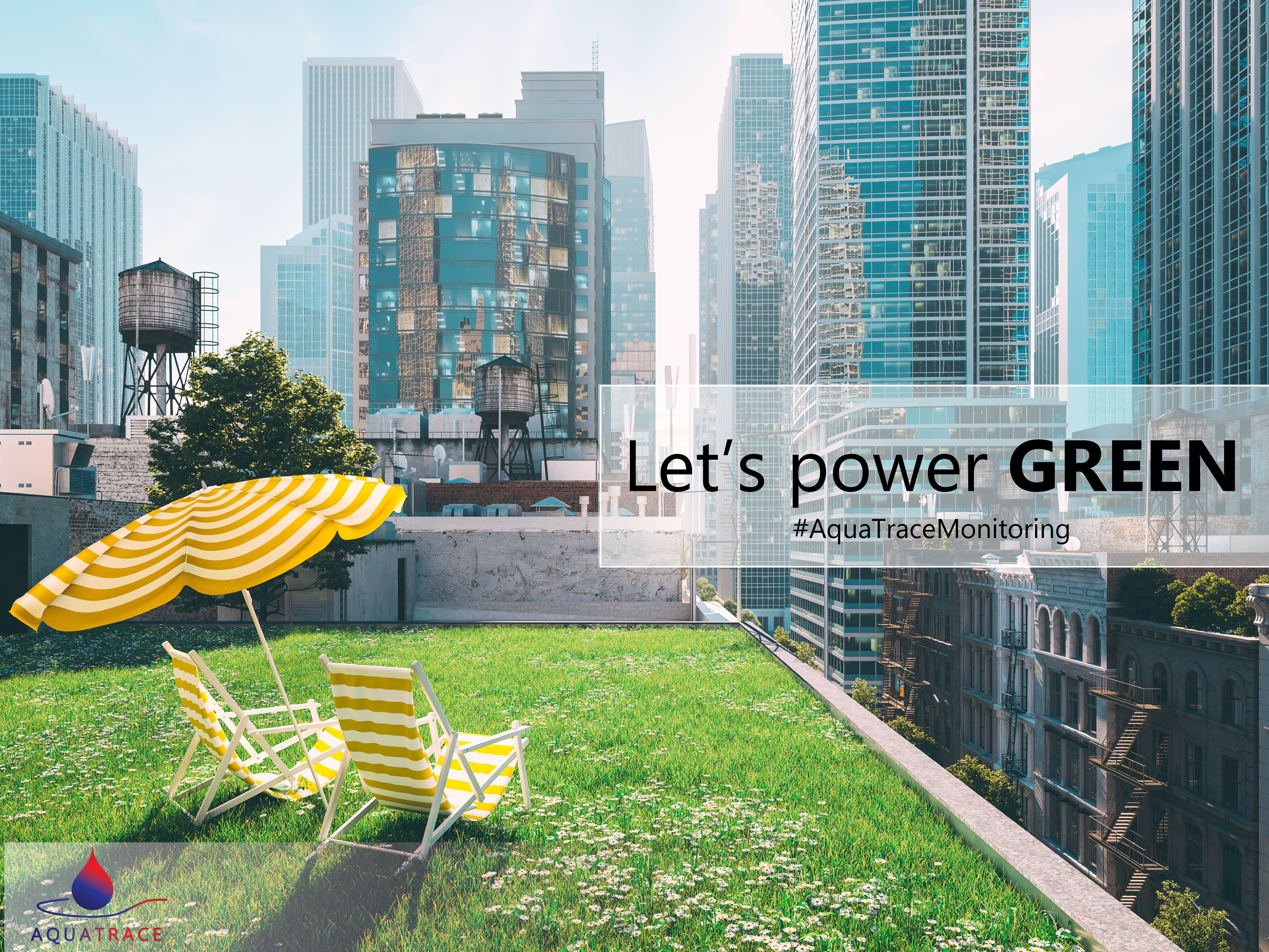 As our world is slowing down, we want to take this time to talk about green roofing. Green roofs have been shown to be one of the most effective ways to make our cities more sustainable and resilient to climate change, whilst providing green spaces for families to thrive. Yet, green roofs are still not as common as they should be.

Why is this: Too expensive? Too complicated? Too much risk of leakage?

We at AquaTrace are committed to improving construction standards by implementing new technologies that monitor your building and mitigating your risks, thus allowing for easier adoption of technologies like green roofing by the industry.

Why do we at AquaTrace think green roofs are important?

Green roofs can significantly increase the amount of urban green in industrial environments allowing people access to nature in their everyday life. Multiple studies have shown the positive effect of green spaces on the human brain, and green spaces are now, more than ever, recognised as a pivotal part of urban projects.

Green roofs can contribute to alleviating stress in workplaces, leading to higher productivity and better mental health, while improving people’s quality of life.

Green roofs are a valuable practice for mitigating the adverse effects of urbanization. Green roofs can significantly improve air quality by helping reduce the concentration of air pollutants.

However, the concerns around the costs related to eventual roof leakage problems are still one of the main obstacles associated with a widespread application of green roofs.

Indeed, when a leak happens the costs and challenge in finding it escalates quickly with a green roof!

AquaTrace is the only reliable solution for accurate leak monitoring in real time which avoids lengthy and complicated days of trial and error, as our technology can pinpoint the location of a leak down to 1 m2.

We at AquaTrace also care deeply about the urban heat island phenomenon, which refers to the fact that urban areas tend to have higher temperatures than rural areas, due to the high number of roads and high building density. During the daytime, urban areas are on average 1.8 °C hotter than rural areas and this is even worse at night as buildings retain a lot of the heat absorbed during the day.

We at AquaTrace focus on roofing strategies and believe that green roofs can be of great help to our cities in improving air quality by:

·        Preventing an increase in air pollution

Let’s talk about the effects of green roofs on runoff water:

The use of green roofs can drastically reduce and minimise runoff water from storms, by absorbing it into the soil and transferring it back to the air through evapotranspiration.

A study found that the annual net rainwater balance on a conventional roof in Kansas City is 32.3 inches, whereas using a green roof the net amount can be reduced to 3.3 inches only!

The greater amount of rainwater absorbed by the soil can create a highly moist environment and can be a cause of concern in countries where evapotranspiration doesn’t happen quickly enough to preserve the structural integrity of the roofing system.

AquaTrace is determined to help the construction industry make a substantial shift to green roofing by proving a reliable system that monitors the status of the waterproofing performance of the roofing systems 24/7, giving the architects and the roofers the data they need to make sure the roof structure is preserved.

Multiple studies have also demonstrated the positive effects of green roofs insulating properties in reducing heat transfer from a building’s exterior to its interior (i.e., heat flux). On average, the need for air conditioning load can be lowered by 10 to 30 percent.

The soil used on green roofs provides insulation, and the vegetation shades the roof from solar heat, thereby lowering the temperature of the roof and the air directly above it. This, in turn, reduces the power need for air conditioning in summer and heating systems in the winter.

Yet, the soil and the roots of the plants can sometimes penetrate the waterproof membrane, causing roof leaks that could result in structural damage.

AquaTrace provides a live monitoring system that will protect you knowing the integrity of the waterproofing membranes while your plants grow and give you the peace of mind you need to enjoy your green roof.

What about green roofing and legislation?

The New York City Council has recently passed new legislation aimed at reducing greenhouse gas emissions from buildings and improve energy efficiency. This legislation represents the strongest and most comprehensive attempt to reduce greenhouse gases in NYC. As part of the new legislation, the law now requires solar panels or green roofs on all new construction as well as buildings undertaking major roof renovations.

We at AquaTrace are ready to support the shift to green architecture and have developed an innovative IoT solution to monitor the waterproofing performance of any roof, thus allowing for risk mitigation in your new architectural green designs!

Multiple cities are taking green roofs as a requirement for new builds. In Toronto, Canada, new buildings with a surface area of more than 2000 m2 should have between 20% and 60% vegetation coverage of the roof area. In Tokyo, Japan newly constructed buildings must have at least 20% vegetated roof; in Portland, USA, all new buildings should have at least 70% green roof coverage of their rooftops; and in Basel, Switzerland, the roofs of new or retrofitted buildings need to be covered with at least 15% vegetation

Yet, we can do more. Climate change is knocking at our door, and green roofs have demonstrated their role in improving the thermal and energy efficiency of buildings.  Green roofs can be complicated and risky in terms of repairs should any water leak arise. AquaTrace is bringing to market a novel patented IoT technology to monitor the waterproofing status of any roof, providing a solid solution to minimise the risk of water damage in green roofs, thus maximising their benefits.

AquaTrace is committed to better building technology for a better future.

Let’s talk about a problem well known to everyone: ponding water

Flat roofs are becoming more and more common in modern green architecture. Flat roofs are convenient, cheaper to install and, more importantly, flat roofs allow for space for ease of installation of solar panels and placing of energy units such as air conditioning units required.

But flat roofs do not come without a challenge, especially when considering the difficulty of draining water correctly from a flat surface. Ponding water refers to the water that remains visible after a rainfall, which quickly undermines the integrity of the roof damaging the surface, destroying the waterproofing membranes, and eventually leading to leaks and potential for roof collapse.

We at AquaTrace have made our goal to provide a reliable solution to monitor the integrity of the waterproofing membranes on flat roofs. We have developed a novel patented solution to know in real time the exact moment and the exact location of a potential failure. We avoid a leak from damaging the building structure and keep you safe in your home.

With our service, you will be able to make the best of your flat roofs, making use of more solar panels, more power saving technology, without the worry of ponding water damaging your roof. Monitor the performance while enjoying green energy.

Flat roofs: what happens when we see a leak?

When water damage appears on the inside of your building under the form of moisture or a running leak, roofers will be called to fix it.

Thermal imaging is not fully reliable to pinpoint the leak.

But what if roofs were equipped with a technology to know exactly where leaks are located?

With AquaTrace technology, roofers would simply have to log into our AquaTrace portal and will know EXACTLY where a leak is located and would be able to track whether the repairs have been successful or if the roof needs more attention, giving YOU the safety to know that your building structure and assets are safe, and giving the ROOFERS the ability to confidently carry out repair works. 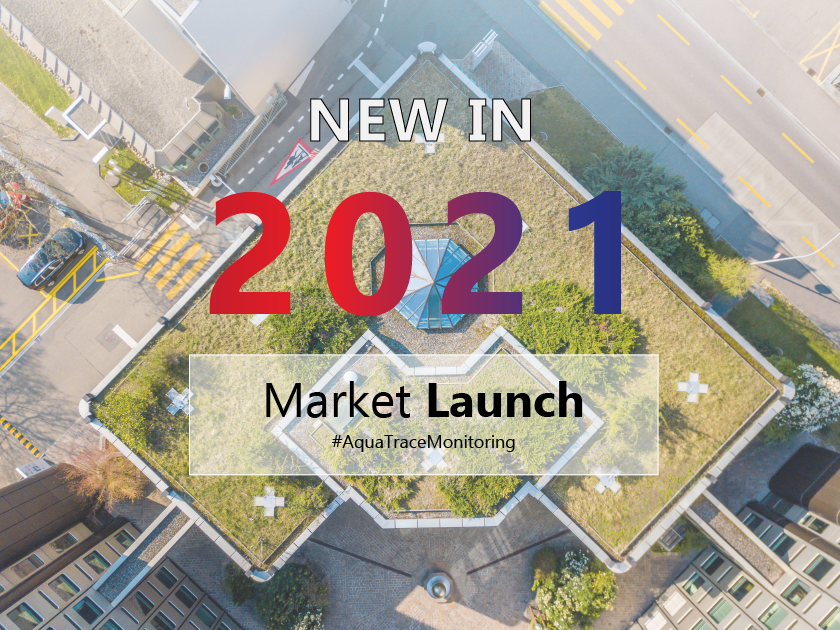 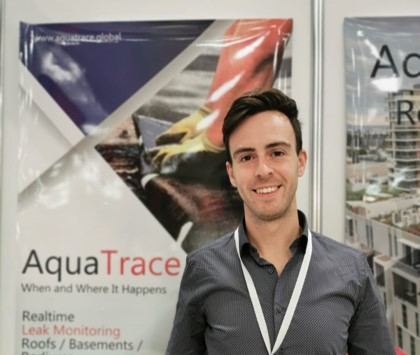 We are setting new industry standards with regards to waterproofing performance.

© All Rights Reserved by AquaTrace Limited.